Project Summary
Irish Water are currently constructing a new Waste water Treatment Works (WwTW) to serve the town of Bundoran in County Donegal, Ireland. BAM Civils have been commissioned as principle contractor for construction of the WwTW together with all associated pipework.

BAM Civils appointed AMS No Dig Ltd as HDD and Outfall Contractor to design and build the outfall section of 560mm pipeline. This was to pass under the sea wall at Pollbrean terminating on the sea bed 10m below the mean low water level 584m off shore in Donegal Bay. See another Outfall Case Study

The main considerations when designing the outfall were:

HDD was selected as the construction technique as it was the most cost effective solution and produced less environmental impact than alternative installation techniques.

The design, planning and approval process took two years to complete before construction commenced in January 2017. AMS prepared detailed construction proposals including all calculations necessary to gain construction approval from the stake holders.

Pilot Stage
The Drill Guide Gyro guidance system, mud motor bottom hole assembly (BHA) fitted with a tri-cone drill bit was used to construct the pilot which was terminated 10m short of the of the punch out point on the sea floor within the bay.

Delayed Punch Out
The punch-out of the bore hole refers to reaching the target location for the HDD exit point. Once a borehole reaches its destination on the seabed, the drill path on an outfall project effectively becomes an uninterrupted tunnel to the ocean. After this stage, any drilling operations inside the hole will result in some form of discharge from the borehole into the marine environment of cuttings and drilling fluid.

The major benefits of delaying the punch-out were:

Upsizing the Borehole
Verification of the survey data and validation of the pilot hole delayed punch-out location was confirmed before commencement of reaming operations.

The reaming assembly was used in a forward mode of operation and not the conventional pull-reaming mode. Forward reaming is more commonly used for outfall projects and greatly reduces the need for offshore vessel support associated with the back reaming (pull-reaming) method.  The borehole data provided pre-construction indicated forward reaming could be safely undertaken in the consolidated formation expected.

Once the reaming and hole cleaning stage was completed the punch out assembly was re-introduced to the blind end of the hole for final punch out.

After the drill pipe and BHA was withdrawn from the borehole the drill rig was removed and the pipe pusher was positioned and anchored. The pre-fabricated length of pipe was maneuvered and fed through the pipe pusher using mechanical lifting methods and pipe conveyors.

The pipe was pushed into position over a three hour period which included welding the two sections of pipe together midway through the operation.   The pipe push was complete when the pushing head emerged from the borehole on the sea bed which was confirmed by divers. 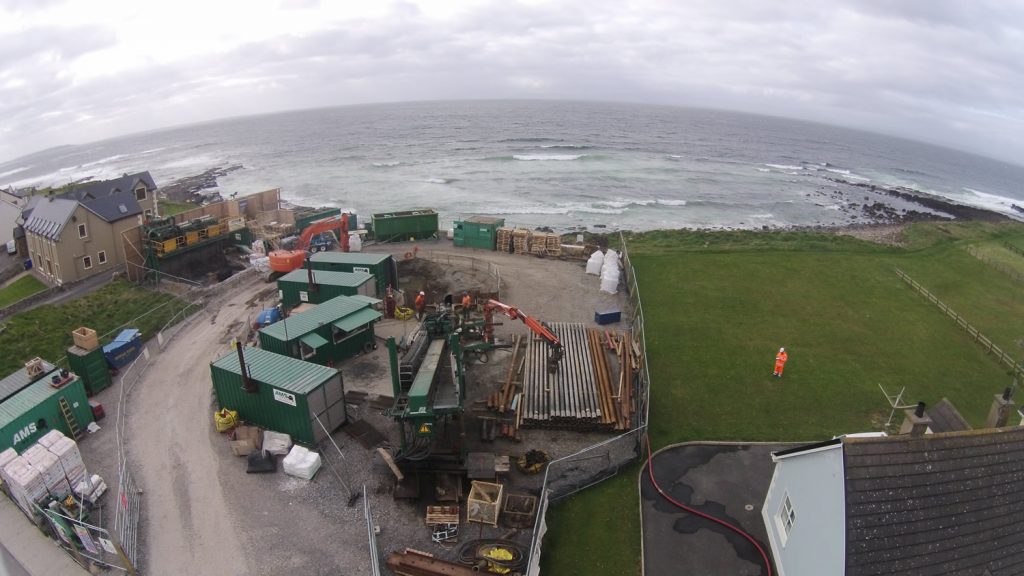 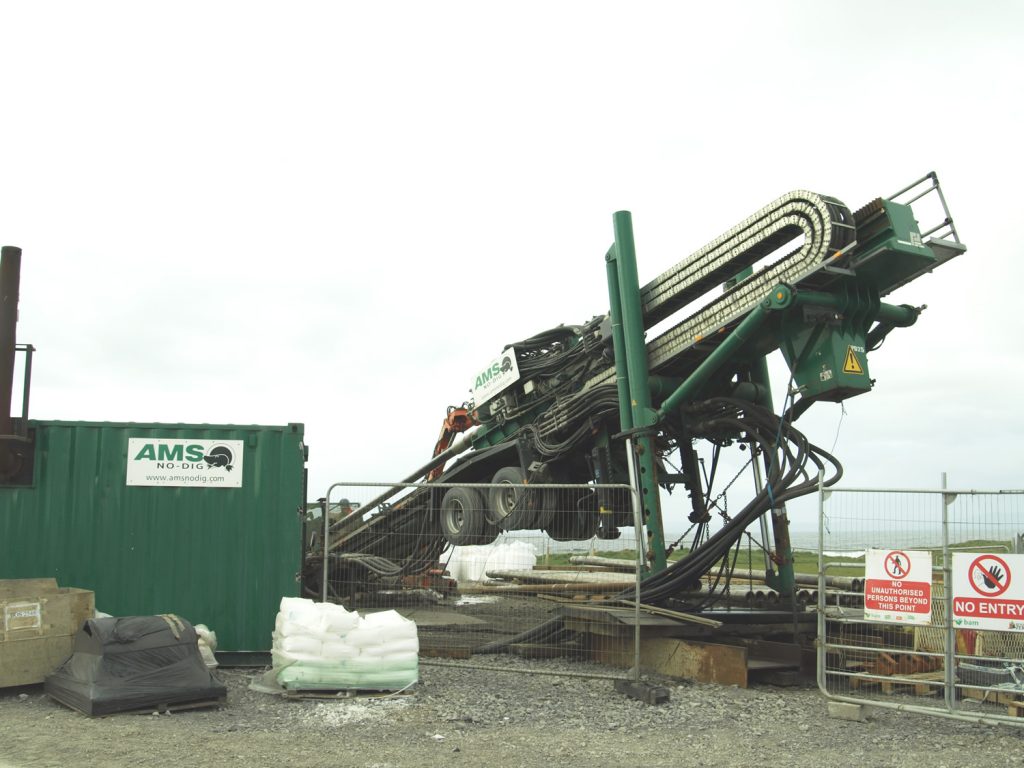 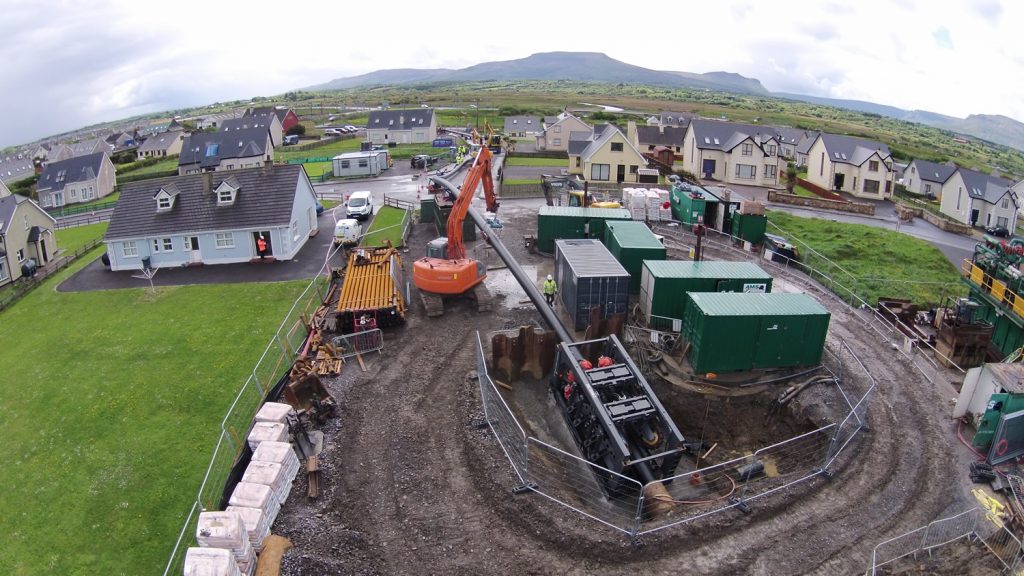 Pipe pusher in position and pipe installation in progress 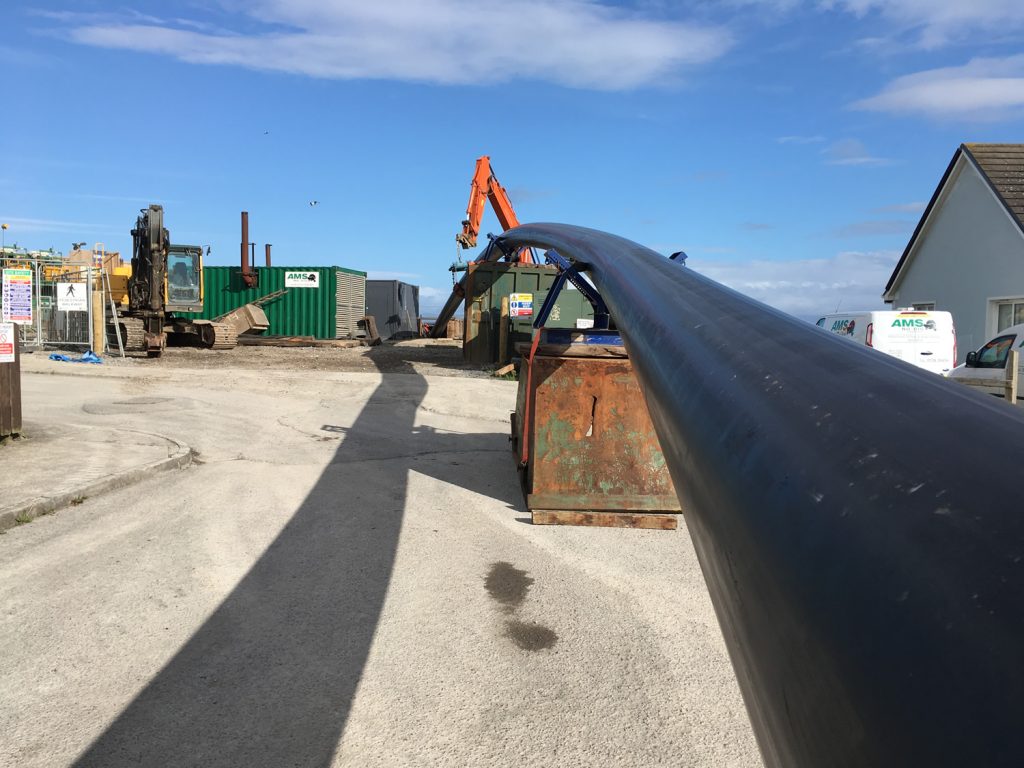 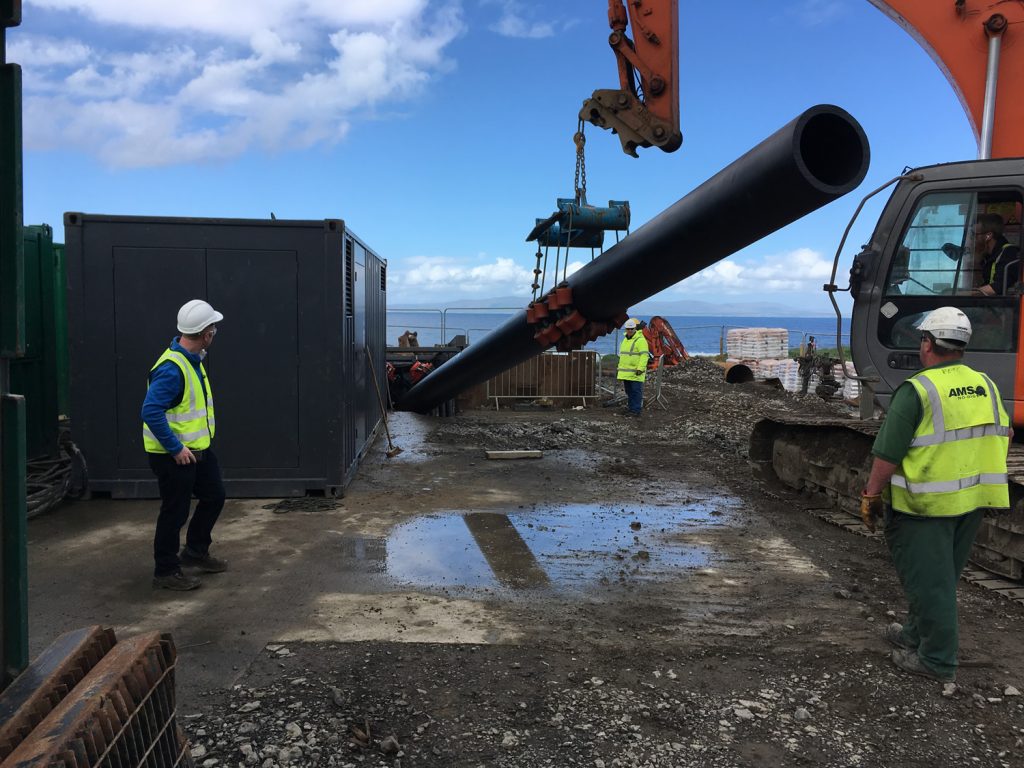